“While there is not a lot of detail just yet about how institutional investors will fit into the Australian housing market, it seems the Albanese government is laying the foundations for a new kind of property ownership in Australia.”

The vast majority of rental dwellings are owned by private sector investors, most of whom are likely to be small-scale landlords rather than institutions.

Based on the latest census data, of the 2.8 million occupied rental properties on census night, only 12 per cent were owned by a government housing authority or community housing provider.

Data from the Australian Taxation Office for the 2019-2020 financial year showed there are 2.22 million individual investors in Australia, or about 8.5 per cent of the country’s total population. Of these, 1.59 million own one rental property while 633,958 own two or more investment properties. 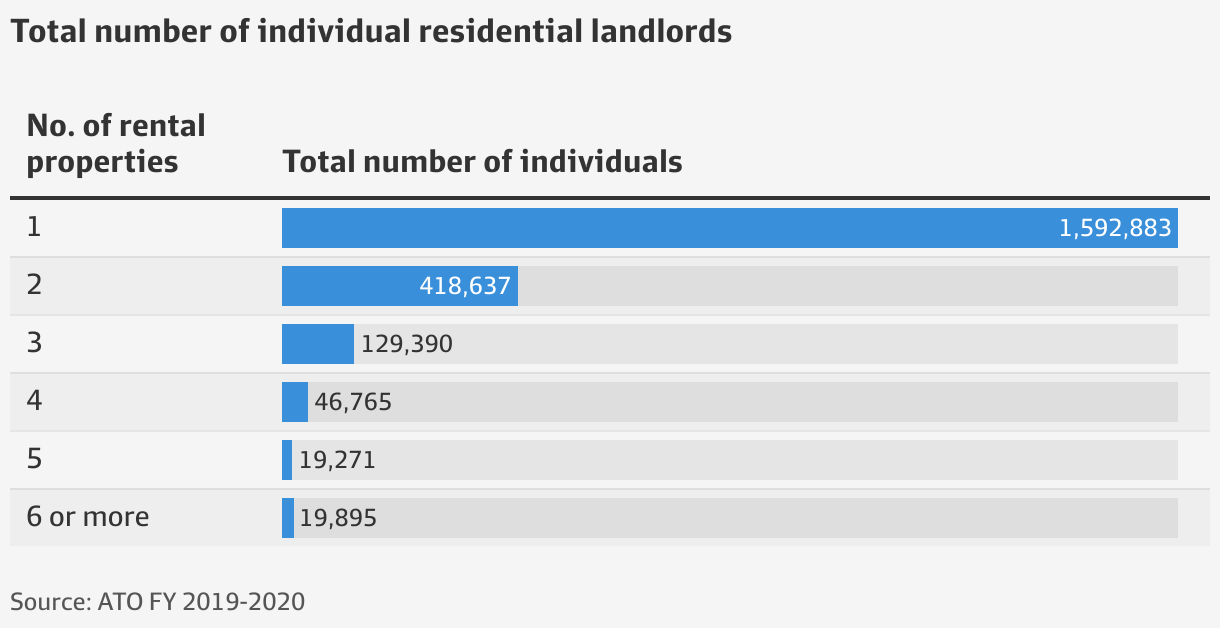 The Survey of Income and Housing (SIH) conducted by the Australian Bureau of Statistics for the 2019-20 financial year also found that 66 per cent of Australian households owned their own home with or without a mortgage while 31 per cent of households rented their home.

“Small-scale investors are the predominant owners of rental housing in Australia, so it’s important this sector of the market is incentivised, otherwise rental supply is likely to remain critically low, at least over the short to medium term,” Lawless says.

“I think there is room in the housing sector for different models of investment. However, the government needs to be mindful of keeping a relatively level playing field.

“Providing investment incentives to the big end of town could be at the detriment of small-scale property investors, many of whom are probably already feeling like investment disincentives are mounting.”

The question of affordable housing

There are many unknowns in the accord including just how much of these 1 million homes will be dedicated to affordable housing and how this can be incentivised and enforced.

So far, the accord outlines funding that will incentivise institutions to invest in social and affordable housing by “covering the gap between market rents and subsidised rents”.

The government also promises to review the barriers to institutional investments in housing. Institutional investors and super funds are pushing for the government to grant them bigger tax concessions and lower land costs that will enable them to expand commercial build to rent (BTR), which is a premium product, into a mainstream market offering.

These include reducing the 30 per cent withholding tax on foreign investors in build to rent to 15 per cent.

Stuart Penklis, Mirvac’s head of residential, says although there are numerous policies and tax settings already in place to support the other living sectors, more needs to be done with other asset classes such as BTR.

“As one of the few property groups in Australia with build to rent currently operational as well as build to sell capability, Mirvac is a strong believer that both options are an important way to address our housing supply shortage,” he says.

“We would like to see a level playing field for build to rent investment with other asset classes. State planning reforms and taxes can also help drive more investment in this growing sector.

“Mirvac has a target to deliver 5000 apartments that are operational by 2030, we believe that build to rent will provide a compelling alternative to traditional housing models here, as we’ve seen in many other vibrant cities around the world.”

But the Productivity Commission’s report into housing and homelessness says BTR subsidies are poorly targeted, as most tenants were in the mid-high income range, and they did little to encourage construction of additional housing but rather diverted resources out of other housing types.

Productivity Commissioner Malcolm Roberts said the BTR sector was growing and had potential, but did not merit special tax treatment.

“The government shouldn’t be distorting the tax or the planning or other systems at the expense of other construction to support build to rent,” Roberts told The Australian Financial Review.

The growth of build to rent

BTR are large, high-rise blocks of apartments owned and managed by a single entity and purpose-built to be rented out over the long term.

The number of investors targeting Australian BTR has grown exponentially over the past 18 months, with over $3.5 billion raised and committed to the sector since January 2021 according to Savills’ third-quarter BTR report.

Institution-owned BTR stock stands at 3800 with a further 8,400 units under construction.

A total of 22,500 units are in the pipeline including those at the application stage, bringing the total size of the sector to 34,700 units completed or in development. By the end of 2024, 15,400 BTR units are set to be completed.

Although some super funds including Aware Super, Australian Retirement Trust and AustralianSuper are making forays into the affordable end of the BTR sector, it’s still dominated by Mirvac, Rich Lister Tim Gurner and Macquarie, along with foreign investors such as Greystar, Sentinel and Oxford Properties, an arm of Canadian pension fund OMERS.

The main barrier for many super funds is the low investment returns. While rents are surging across the capital cities, gross rental yield for an average residential rental property is still just at 3.7 per cent nationwide. 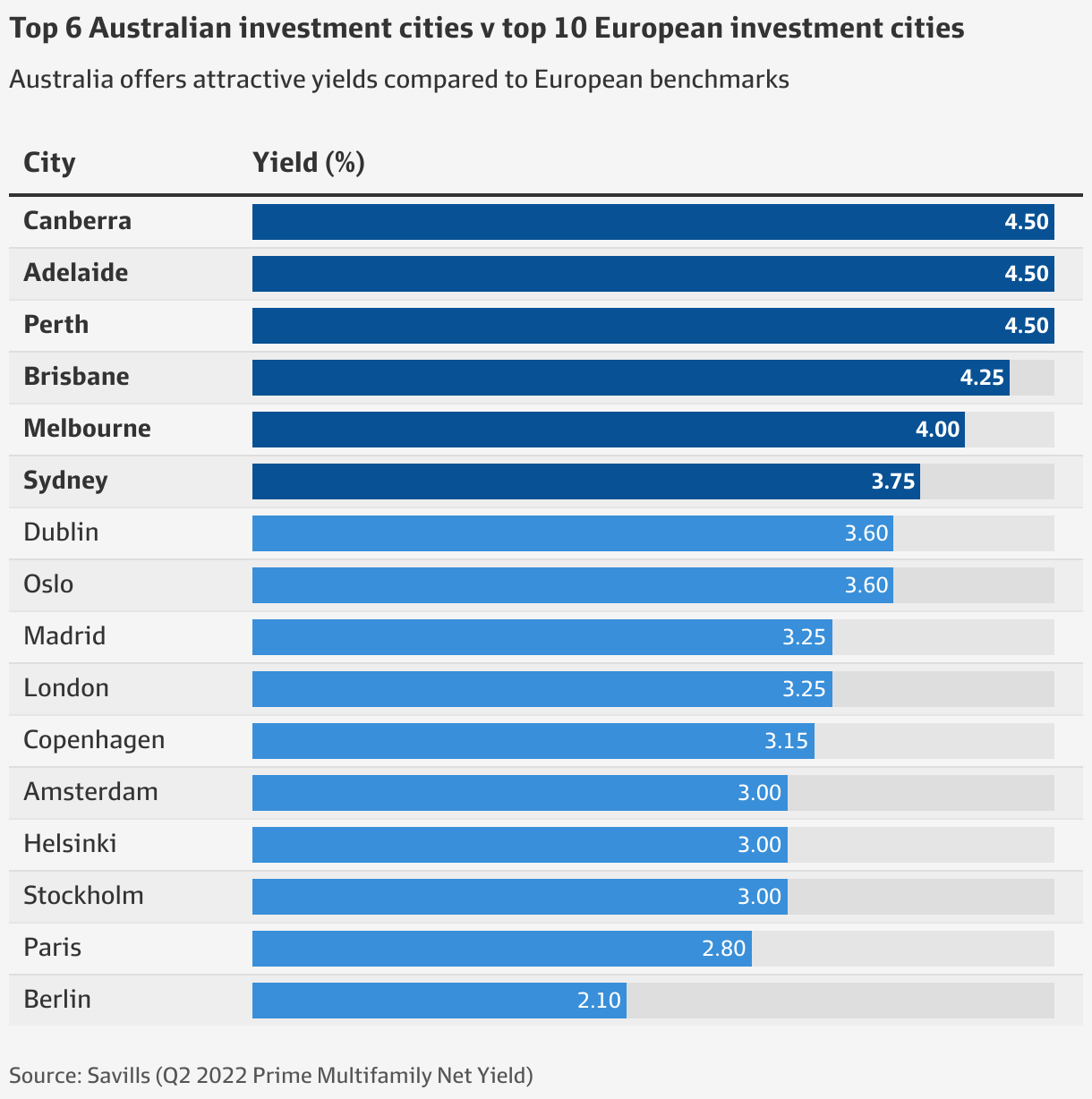 The biggest super funds say their investments in affordable housing should return between 6 per cent and 11 per cent and won’t accept less under the government’s plan to enlist them alongside the institutional investors to ramp up housing supply.

The president of the Real Estate Institute of Australia, Hayden Groves, says superannuation funds or institutional investors should not be extended any benefits such as taxation or other incentives that mum and dad investors don’t currently enjoy.

“Institutional investors want at a minimum three forms of concession to make BTR viable: less tax on foreign investment, preferential GST treatment and not to pay land tax per apartment. Offering these to super funds or other investors over private citizens would be a grossly unfair outcome,” he says.

Competing for a market

In the short to medium term it’s highly unlikely that the build to rent sector can expand sufficiently for it to compete for a significant share of the mainstream rental property market, says Hal Pawson, professor of housing research and policy, and associate director at the City Futures Research Centre, UNSW Sydney.

“It’s more likely that BTR providers may start to compete with existing small scale landlords renting out units towards the top end of the market,” he says.

“BTR providers offering high-quality units, professionally managed and with strong tenure security might even come to be seen as a ‘market disruptor’ in a sector which is arguably structured more for the benefit of providers than consumers.

“If the institutionally owned market rental sector takes off, it may be that there will be renewed efforts to create investment products enabling small scale investors to buy into the new asset class via institutions.”

But Shane Oliver, AMP Capital chief economist says Australia’s obsession with real estate will continue to lure individual investors for the time being, at least.

“It’s going to take decades, maybe even a century, before there’s any squeezing out of individual investors,” he says.

“We’re only just at the very beginning of this and the government is really addressing a part of the market that’s not well supplied. We have a massive shortage of property and we have a particularly large shortage of social and affordable housing.

“So there should be enough room for everybody to continue to invest in property. I don’t think ordinary individual investors should be worried about being squeezed out.”